This is the continuation and Part 4 of my Storage Spaces and Data Deduplication review. Here’s an index of test cases on this part and links to other parts:

Removing a Disk from the Storage Pool

At the moment, we have 4 disks in our pool. I’d like to reduce this to 3 disks. Scenario is that my virtual disk no longer needs that much space, and so I’ll delete some files and then see if I can remove a disk from the pool. I think you’ll find few things here quite interesting.

Current state: Remember that disk just went offline and will not accept any further writes to it (see screenshots earlier in Part 3). I can however, bring it online and then delete files. As I do this, I will check the health page of the virtual disk, see if some of the space on the disks are reclaimed. As this happens, I will make an attempt to remove the disk from the pool.

Action: Delete 20GB worth of files. 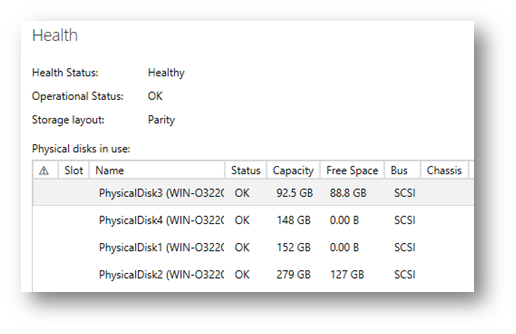 It would appear that deletions that happen at the volume level are not immediately (or perhaps ever – Update: see Part 5 on my learnings as it turns out reclaiming of space is possible) reflected on the thinly provisioned virtual disk. Let me attempt to remove Disk3 from the pool and see what happens.

I clicked on Yes, and this is what I got: 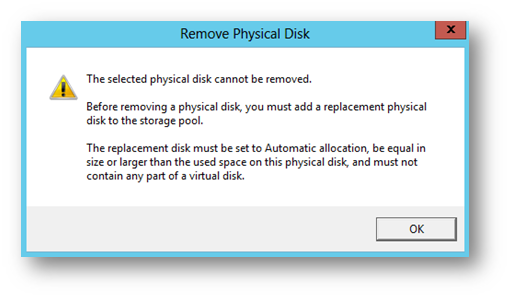 I know there is sufficient space to hold things together – but how do I vacate the disk? I did some research. The “Usage” property of physical disk needs to be changed, and then “Repair” operation needs to be run on the Virtual Disk. Note that setting the usage policy to “Retired” doesn’t actually vacate the disk. I have not found a way to do this from the graphical interface, so here how it’s done in PowerShell. I also have NOT been able to find a way to reduce the allocation footprint of a thinly provisioned virtual disk. That is, once you reached to a point, it doesn’t appear to ever go back. I will continue to research this but for now that’s my assumption.

Update (October 4, 2012): I have learnt (Thanks Nandu!) the ways to reduce allocation. See Part 5 for a special case to demonstrate reduction of storage allocation on a virtual disk.

Given that I am unable to reclaim the needed space right now, I will not be able to take out 1 disk just yet. I will need to bring in more total capacity and take 2 disks out. Specifically, the Disk5 from primordial is coming in, Disks 3 and 4 are going back to primordial. I am hoping to be able to achieve this by first setting usage policy on 3 and 4 as retired, then adding the disk5 to the pool. When I then run repair on the volume, data on 3 and 4 will transfer over to 5, I will then expect to be able to remove those disks from my pool. Let’s see if theory works.

Now I’m adding Disk5 to the pool. After these changes, and a refresh operation, here how my VirtualDisk1 is showing. Because I set two of the disks as retired, no new data can be written to them. However, I can read data off of the volume without any issue. Also note that despite adding Disk5 to the pool, Disk5 does not yet have any allocation showing under the virtual disk.

Next, we need to run the “Repair-VirtualDisk” command.

During repair process, you can see that Disk5 started to be utilized and retired disks are not showing. At this point I’m not sure if retired disks can simply be removed from the system or not. I will attempt to do so:

Take a quick look at the state of our virtual disk. If you notice, status is reporting healthy and that disks3 and 4 are not in use. This should be sufficient for me to do the removal. Let’s check…

This time it proceeded to remove, and displayed this message:

I don’t think it’s actually doing any lengthy repair tasks as the disk had no content for this virtual disk. Quick “refresh” confirms this. Disk is not in repair mode and removal appears to be successful. I did the same for Disk4 and here where we are now:

So what did we learn here?